111 Schilling Road is a 150,000 square foot one story office building in the Schilling Place business park - a joint venture development by the MacKenzie Companies and Kinsley Construction - currently occupied by Traveler’s Insurance Company.

Built in 2004, the building’s electrical systems were beginning to show signs of inefficiency. During the budgeting process for the 2009 operating year, MacKenzie identified that the electric usage had been increasing at a rate which did not match our experience at other buildings that MacKenzie manages. Installing a new energy management system and working closely with the tenant to define operating hours for the building allowed MacKenzie to optimize energy usage. MacKenzie then rebid the electric supply contract for it's entire portfolio to create further significant savings which had a direct impact for the Traveler's building. The result - an immediate 10 percent reduction in electric costs at 111 Schilling in 2009 taking the electric costs from$3.31 per square foot (psf) to $3.01 psf and a system that would continue to reduce costs moving forward. To date, MacKenzie has reduced electric costs from $3.31 psf to $2.23 psf for an aggregate reduction of 32.6 percent, $1.08 psf or $162,000 per year. 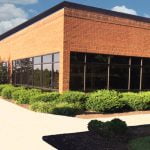