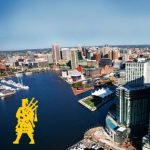 Between February 2015 and February 2016, Maryland added 37,600 nonfarm jobs according to the Bureau of Labor Statistics.  That translates into 1.4% job growth, a bit short of the 1.9% rate of growth experienced nationally.

The Baltimore metropolitan area added the majority of those net new jobs.  Over that same twelve-month period, employment in the Baltimore region climbed by 20,800 positions, translating into 1.6% job growth.  The sector adding the most jobs on a year-over-year basis was professional and business services (+5,300), a segment closely aligned to the office market.

Despite ongoing macroeconomic progress, the local office market took a step back during the initial months of 2016 according to MacKenzie Commercial Real Estate Services data.  Net office space absorption totaled -39,433 sf during the quarter, with -82,905 sf net absorbed in Baltimore City.  On a year-over-year basis, regional net absorption was an uninspired -17,406 sf.

Still, from certain perspectives, the local office market appears healthier.  A year ago, total office vacancy in the Baltimore region stood at 14.7%.  During 2016’s initial quarter, vacancy stood one percentage point lower at 13.7%.  The decline in vacancy was especially noteworthy in the City Center Class B category.  Vacancy in that segment fell from 29.7% a year ago to 18.9% more recently. This is largely attributable to successful adaptive reuse.  The 330,000 square foot building known as 225 N. Calvert Street is being converted to apartments.  One could make the argument that the move toward equilibrium in the office market is today more directly driven by population flows than job growth, though these factors are of course intertwined.

Certain suburban markets are progressing using more traditional techniques.  For instance, nearly 51,000 square feet were net absorbed in the southern metropolitan submarket led by roughly 126,000 sf of net absorption in Columbia.  However, the BWI submarket, Harford County, and Baltimore County East each sustained negative absorption on a quarterly basis during the 1st Quarter of 2016.

Given lackluster and inconsistent absorption totals, it comes as little surprise that rent growth is soft in most markets.  A year ago, regional asking rent stood at $22.29/sf.  A year later, that figure stands at $22.74/sf, an increase of $0.45/sf or 2%.  Asking rents have actually declined on a year-over-year basis in the BWI submarket as well as along the Route 2 Corridor and in Baltimore County East and Towson.

For now, the region’s economic recovery remains in place.  A number of industries appear poised for expansion in 2016, including healthcare, medical research, IT, construction and retail.  Many of the jobs attached to these segments, however, do not directly relate to the office market.  The implication is that the local economy could continue to recover at a respectable rate, but that the local office market’s recovery will continue to be erratic and grinding.