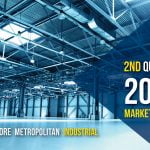 Generally, there are two types of markets – those that both produce and distribute goods and those that for the most part only distribute them.  Baltimore is an example of the latter.  Though there are still remnants of industrial production in Central Maryland, for the most part the Baltimore metropolitan area can be viewed as a center of throughput as opposed to output.  That’s too bad, because more production here would imply more value added contributions and higher quality jobs.

That said, with the e-commerce economy in full swing and with strategic investment having been made at the Port of Baltimore, the distribution economy continues to expand locally.  More than 600,000 sf of warehouse space was net absorbed over the past three months.  The region’s warehouse vacancy rate declined by more than three-tenths of a percentage point during this period to 7.9%.

Warehouse space absorption was most prevalent in Baltimore City and Baltimore County East, which collectively absorbed approximately 500,000 sf of space.  Vacancy in the eastern portions of Baltimore County declined from 14.4% to 13.1%.  Most submarkets experienced declines in vacancy, including Baltimore City (-0.7%), Harford/Cecil (-0.5%), and Carroll County (-0.9%).

The region’s flex market didn’t fare quite as well, net absorbing a bit more than 22,200 sf during the second quarter.  While Baltimore City and Baltimore County experienced negative net absorption, the Annapolis/Route 2 and Harford/Cecil County submarkets net absorbed 37,998 sf and 33,242 sf, respectively.  The regional flex market vacancy rate was virtually unchanged during the quarter, and now stands at 9.7%.

Consumer spending should continue to drive warehouse and other forms of industrial space demand during the quarters ahead.  Wages are beginning to expand more rapidly and further declines in interest rates recently will help unleash yet another mortgage refinancing boom.  Fewer families are underwater on their mortgages relative to a few years ago, and can now qualify for a refinanced mortgage.  That will help drive consumer spending during the balance of 2016.