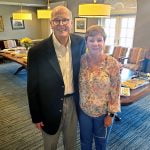 Seeing Frederick “Skip” Hearn’s name attached to the leasing announcement for a high-profile, trophy commercial office building in the greater Baltimore metropolitan region has always been a rare occurrence. The former Senior Vice President for MacKenzie Commercial Real Estate Services says he wouldn’t have had it any other way as his nearly seven-decade career as a brokerage professional representing owners and companies comes to a successful conclusion. Always shy about generating any type of fuss or attention, including this article, the 87-year-old built his resume hitting singles and doubles while happily letting others shine in larger headline-grabbing transactions. He recently announced his intentions to retire after 67 years.

“My career never seemed like work to me, because I loved engaging with people, learning new things and solving a particular problem,” Hearn explained. “The mark of a good broker is someone who is an excellent communicator, first and foremost, followed by the ability to get along with all types of people. Your true personality will eventually shine through and companies gravitate toward people who are sincere, hard-working and impeccably honest. It sounds fairly simple, but is much more difficult to execute.”

Grandfather and father had long careers as residential brokers

Hearn was destined to enter the commercial brokerage industry. His grandfather, B. Franklin Hearn, and his father, B. Franklin Hearn, Jr., were long-time residential real estate brokers in Baltimore County. Though Hearn never met his grandfather, he heard countless stories about B. Franklin’s work from his father, who functioned as Vice President of Roland Park Realty, a prominent firm that worked primarily in the Guilford and Roland Park areas. With a family so involved in real estate, there was never a question about Skip’s career path following his graduation from Duke University, especially after he helped around the office during his summer breaks.

After working with his father for several years, Hearn shifted to W.H.C. Wilson & Co. for a time, before changing his career aspirations slightly upon joining Kornblatt & Fenniman as a commercial office broker. He worked alongside commercial office brokerage icons such as David Kornblatt and Mickey Miller. Patrolling the downtown Baltimore commercial office market, Hearn faced friendly brokerage competition from the likes of Bernard and Harold Manekin, Joe Casey and Wally Pinkard, among others. Parker Frames was another active brokerage company that Hearn often competed for deals with.

Following the path of other entrepreneurs and high-achievers, Hearn’s next step was founding his own brokerage firm, Hearn & Knott, in the mid-1960s, together with his brother Beau and partner Joseph Knott. The group, which focused on uptown Baltimore, later joined O’Connor & Flynn as its commercial office division. MacKenzie & Associates, Inc., now The MacKenzie Companies, executed a merger with the entity (then known as O’Connor, Piper & Flynn) in  1992 and Hearn has been an integral part of the company ever since.

Hearn estimates that he was involved with more 200 commercial real estate transactions on an annual basis for much of his career. When asked what has changed the most over the past 70 years, he simply responds, “Everything.”

“Computers obviously didn’t exist and I still hate using them now, so all of the commercial office listings were written down in a big fat book,” Hearn explained. “Black’s Guide, the highly-regarded compendium of commercial office data and office availabilities, had also not yet been invented. So, if a company was looking for 3,000 square feet of space, it was a painstaking process to sift through our rudimentary system of files before presenting them to the end-user.”

Hearn says that what hasn’t changed is what kept him happily engaged in the business for nearly 70 years: the people.

“Building and maintaining relationships, getting to know people and businesses on an intimate basis and illustrating passion for the client are still the most important elements for success,” Hearn said. “There are also absolutely no short-cuts for hard work and determination. Every problem can be solved if you work hard enough to solve it.”

Hearn says his secret to success was “representing a lot of different building owners, many of which were small projects. But I knew both the buildings and owners inside-out. That was a competitive advantage. My philosophy of hitting singles and doubles would typically generate 10 to 20 different leases at the same building. I built my career that way and ultimately sold most of the buildings.”

“There is nothing really left for me to accomplish”

Hearn credits his long-time colleague, Doris Goodhues, with making sure he was always at the right place at the right time. “DR deserves most of the credit for my success,” he said of the Senior Marketing Assistant, with the pair working together for more than 25 years. “She kept me organized and focused, assisting with drafting business documents and providing technology support and guidance which made things considerably easier.” He also acknowledged the support of his coworker Terry Brouillette who helped process the completed transactions on his behalf.

While he remains in good health, he feels now is the perfect time to retire. “There is nothing really left for me to accomplish, and I am not really sure how I will fill my time, to be honest, although my family is very important to me.”

The fourth generation of Hearns have already made names for themselves in the commercial real estate community, with four of Skip’s five children actively involved in the business. A fifth child works in theatre in New York City. “It is too early to speculate if any of my grandchildren will follow our footsteps,” he laughed.

Hearn is widely regarded as a true gentleman who speaks softly but carries a big stick. Maybe the stick part comes from playing defense at Duke University on its varsity lacrosse team, where players used the heavy wooden model popular in those days. Hearn said he even took the field with Jim Brown, when the former NFL Hall of Famer played lacrosse for Syracuse University at an all-star game.

All these years later, he can still recall the details of that encounter. “He just bowled me over,” Hearn laughed. “But, at the same time, I used that small defeat to learn a valuable lesson. That is, when you get knocked down, it is important to pick yourself up quickly and figure out a way to win the next battle.”

“Skip always joked that he primarily leased small-sized office spaces,” said Scott Wimbrow, President and Principal of MacKenzie Commercial Real Estate Services. “But, at the same time, those leases added up to thousands of successful transactions over the years, many happy landlords and an extremely rewarding career. We are really going to miss seeing and working with him.”