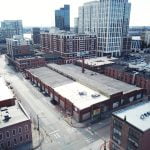 MacKenzie Commercial Real Estate Services, LLC has brokered the sale of 600 South Caroline Street, a 50,000 square foot warehouse building situated between the Harbor East and Fells Point sections of Baltimore City to Chasen Companies for $10 million. The Meyer Seed Company, a three-generation, family-run seed and garden supply operations that dates back to the early 1900s, has owned the property since 1969. The new owner intends to redevelop the 1.19-acre site, combined with the adjoining parcel at 1400 Aliceanna Street, into a 272-unit luxury apartment project that will also feature more than 70,000 square feet or retail amenity space. Mark Deering, Partner and Owen Rouse, Vice President for MacKenzie Commercial Real Estate Services, represented the seller in this transaction.

The site, bounded by Fleet Street, Aliceanna Street and South Carolina Street, is contained within a section of Baltimore City which has experienced exponential growth over the past 25 years with the development of more than six million square feet of commercial office, retail and restaurant space, more than 2,500 upscale housing units, nine hotels with a combined 3,000 rooms, a marina and 9,000 new parking spaces. Major companies that currently lease space in the Harbor East, Harbour Point and Fells Point area include Brown Advisory, Ernst & Young, Exelon, Johns Hopkins Carey School of Business and Johns Hopkins Medicine, Legg Mason and T. Rowe Price.

Chasen Companies, a Baltimore-based real estate development, general contracting and construction management group, has revealed plans to construct a five-story apartment building atop the 50,000 square foot warehouse which will contain 100 one-bedroom and 72 two-bedroom apartment units known as The Whitney. The existing warehouse will be repurposed for retail space and a parking garage. The adjoining parcel at 1400 Aliceanna Street will contain 100 apartments and approximately 12,000 square feet of retail and amenity space. Construction activity is expected to begin within the next several months.

“The MacKenzie team executed a marketing process that yielded a successful and timely sales outcome for The Meyer Seed Company, and the robust interest in this property demonstrated the continued strength of the multifamily asset class in the Harbor East and Fells Point submarkets of Baltimore City,” explained Owen Rouse of MacKenzie Commercial Real Estate Services. “Our well-scripted plan showcased the outstanding in-place demographics and long-term value of this asset and, by widely-broadcasting the opportunity, we were able to generate significant interest from many high-profile investor and development groups. Successfully navigating through Baltimore City’s Historical and Architectural Preservation process and receiving timely entitlements for the new development plan was also a significant factor in achieving the market value for this property.”

Approximately 140,000 people reside within a two-mile radius of 600 S. Caroline Street with an average household income approaching $100,000. In addition, nearly 70% of the population with a three-mile radius is composed of one-person or two-person households. Resident parking will be contained on-site, with additional spaces available at both city-owned garages and through a negotiated arrangement at 805 S. Caroline Street.

According to a report recently released by the Downtown Partnership of Baltimore, housing occupancy contained within a one-mile radius of Harbor East, Harbor Point, Little Italy, Federal Hill, Otterbein and sections of Mount Vernon increased to 95.2% last year on the strength of nearly 43,000 residents and the average rental rate for Class “A” apartments in the city ranged from $1,571 to $3,546.

“With most employers adopting some form of the hybrid work model, there will be increased emphasis on supplying apartment homes that offer flexibility and secondary spaces for home offices,” Rouse continued. “Baltimore will continue to attract new residents based on its lower cost of living compared to other East Coast cities, proximity to natural resources and major employers particularly in the medical and education sectors. We expect additional well-located sites, primed for repurposing and redevelopment, to become available in Baltimore City based on this and other sales outcomes.”