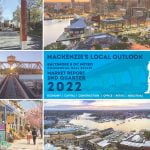 A confluence of factors led by rising inflation, higher interest rates and lower consumer spending have raised the possibility of a local and national economic recession arriving as soon as this year. Despite the impact of geopolitical forces and the continued hangover of the COVID-19 healthcare crisis and slower business growth, vacancy rates continued its downward trend in the retail and industrial real estate asset classes in the greater Baltimore-Washington, D.C. metropolitan region, although depressed leasing activity and corporate downsizing has created a negative net absorption rate in the commercial office sector. The data is according to the Market Report 2nd Quarter 2022 Local Outlook, recently published by MacKenzie Commercial Real Estate Services, with report conclusions compiled in partnership with Anirban Basu, CEO of Sage Policy Group.

According to Basu, the economic outlook has become decidedly bleaker over the past several weeks with inflation surging another 1% in May, job growth reaching its slowest pace in more than one year, the S&P 500 declining in nine of ten weeks for just the third time in the past 40 years and mortgage applications reaching its lowest level since 2000. Consumers have finally begun to pull back, he added, with retail and food service sales falling 0.3% in nominal terms in May.

On a positive note, there is evidence that supply side pressures are beginning to ease and certain retailers, including Target, are considering selling merchandise at a discount to reduce current inventories. Should the national economy enter a recessionary period, the Baltimore-Washington, D.C. metropolitan market is somewhat insulated based on the economic driver of the Federal Government and the existence of a highly diverse business environment.

The volume and size of commercial office leases in the greater Baltimore metropolitan region were closer to 2020 figures than those reached in 2021 for second quarter 2022. The Columbia submarket achieved nearly 300,000 square feet of leasing activity, followed by approximately 270,000 square feet of leases signed in Baltimore City, but the vacancy rate rose in each to 13.8% and 18.2%, respectively. The negative net absorption trend is the result of corporate downsizing or right-sizing and the rise of sublease space which, at 1.7 million square feet of space, resides at an all-time high. Rental rates ticked slightly higher, to offset landlord concession and more expensive tenant improvement packages.

The overall retail vacancy rate in the greater Baltimore metropolitan region declined to 6.2%, representing a slight decrease from the 6.3% rate of the previous quarter and the 6.6% rate from Q2 2021. The total market size is more than 115 million square feet of retail space. These numbers were achieved despite the nearly 80,000 square feet of new retail space delivered recently, with activity shifting from fast-casual and sit-down restaurants to categories that include car wash operators, children’s learning centers and national self-storage brands. Optimism abounds in Baltimore City for a possible retail renaissance, centered around MCB Real Estate’s plan to assume control of the iconic Harborplace on the city’s waterfront

The demand for construction contracting services remains elevated despite a growing sea of headwinds led by material shortages and production delays, rising prices, labor shortages and slowing commercial office space demand. Current lead times for HVAC equipment is 30-40 weeks, 18-20 weeks for wood doors and up to 60 weeks for underground storage tanks. Help is on the way with the $1.2 trillion American Jobs Plan designed to improve our country’s infrastructure bill.