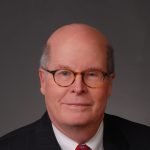 With tremendous sadness, The MacKenzie Companies mourns the loss of Frederick “Skip” William Hearn who, following a brief illness, passed away on October 5 at the age of 87.

Following a commercial real estate career spanning 67 years, Skip announced his intentions to retire from his position as Senior Vice President for MacKenzie Commercial Real Estate Services earlier this year and, over the course of nearly seven decades, it is estimated that he successfully concluded more than 10,000 sale and leasing transactions.

“My career never seemed like work to me, because I loved engaging with people, learning new things and solving a particular problem,” Hearn said earlier this year in an interview. “The mark of a good broker is someone who is an excellent communicator, first and foremost, followed by the ability to get along with all types of people. Your true personality will eventually shine through and companies gravitate toward people who are sincere, hard-working and impeccably honest. It sounds fairly simple, but is much more difficult to execute.”

When asked what has changed the most over the past 70 years, he simply responded, “Everything.”

Hearn was destined to enter the commercial brokerage industry. His grandfather, B. Franklin Hearn, and his father, B. Franklin Hearn, Jr., were long-time residential real estate brokers in Baltimore County. Though Hearn never met his grandfather, he heard countless stories about B. Franklin’s work from his father, who functioned as Vice President of Roland Park Realty, a prominent firm that worked primarily in the Guilford and Roland Park areas. With a family so involved in real estate, there was never a question about Skip’s career path following his graduation from Duke University, especially after he helped around the office during his summer breaks.

After working with his father for several years, Hearn shifted to W.H.C. Wilson & Co. for a time, before changing his career aspirations slightly upon joining Kornblatt & Fenniman as a commercial office broker.

Following the path of other entrepreneurs and high-achievers, Hearn’s next step was founding his own brokerage firm, Hearn & Knott, in the mid-1960s, together with his brother Beau and partner Joseph Knott. The group, which focused on uptown Baltimore, later joined O’Connor & Flynn as its commercial office division. MacKenzie & Associates, Inc., now The MacKenzie Companies, executed a merger with the entity (then known as O’Conor, Piper & Flynn) in 1992 and Hearn became an integral part of the company.

“Building and maintaining relationships, getting to know people and businesses on an intimate basis and illustrating passion for the client are still the most important elements for success,” Hearn said in the interview. “There are also absolutely no short-cuts for hard work and determination. Every problem can be solved if you work hard enough to solve it.” Talking about his impending retirement, Hearn added “there is nothing really left for me to accomplish and my family is very important to me.”

“We lost a true gentleman, in every sense of the word, as well as a person with the utmost integrity,” stated Gary Gill, Chairman and Chief Executive Officer of The MacKenzie Companies. “He set a great standard in many ways, was a selfless mentor to many in the commercial real estate industry, a dear friend and confidant and we were blessed to have known and worked with him for all these years. Skip lived by and taught the importance of professionalism and high character and his word was his bond.”